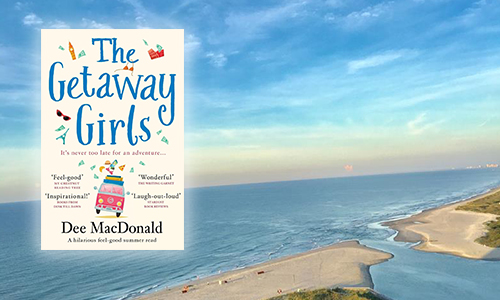 When vacationers head for the Carolina coast, most of them are looking to kick back and relax, fully breaking away from the daily grind. And when your aim is to really get away from it all, there are few better escapes than a great book — especially when it can be enjoyed while laying back on a beach towel with your toes in the sand and the crashing ocean waves as a soothing soundtrack.

During your next vacation in the Myrtle Beach area, be sure to grab a paperback, Kindle or iPad, then head to the beach at Breakers Resort, your personal patio or balcony, or the resort’s oceanfront poolscape. Looking for a great book to escape with? Jump into one of these highly recommended summer reads:

The Getaway Girls: Penned by Dee MacDonald, the best-selling British author of “The Runaway Wife,” this feel-good novel follows a trio of diverse, adventure-seeking women as — after meeting in a less-than-lively flower-arranging class — they throw caution to the wind and set out on a summer vacation to remember. Exploring new and exotic locales as they tour Western Europe together in their luxury campervan, the three make strong bonds while navigating one laugh-out-loud situation after another. But despite best-laid plans, unexpected turns in their adventure await.

The Dirty Book Club: Another offering from New York Times best-selling author of The Clique series Lisi Harrison, this novel explores the importance of friendship — and the guilty pleasure of a dirty book. When lead character M.J. Stark trades her seemingly perfect life — complete with her dream job and plenty of New York City glamour — to relocate to small-town coastal California with her doctor boyfriend, she finds a fast friend in elderly neighbor Gloria. And when Gloria suddenly moves to France to make good on a 50-year-old pact with friends, she leaves M.J. not with a goodbye, but with an invitation to a secret book club focused on erotic tales. In the club’s other hand-selected members, M.J. soon finds the kind of friendships that she didn’t know she needed, but that may just help her to rewrite her own narrative.

Daisy Jones & The Six: This novel by Los Angeles-based writer Taylor Jenkins Reid chronicles the rise and eventual split of one of the biggest bands of the 70s — Daisy Jones & The Six. In telling the tale of Daisy’s coming of age on the Sunset Strip, intimate encounters with rock stars, and eventual discovery by a powerful producer who helps launch her and up-and-coming band The Six to fame, Reid brilliantly captures an exciting place in time and takes readers on an unforgettable ride on the road to success in the music industry.

The Key to Happily Ever After: This romantic comedy from veteran Army nurse Tif Marcelo follows the three de la Rosa sisters as they struggle to keep the family’s wedding-planning business alive — and write their own fairy-tale love stories. As the girls learn the hard way about the challenges of the wedding business (including moody brides, controlling grooms and argument-prone couples), they discover that no matter what curve balls the business may bring, they can always find solace and support in one another.

With the Fire on High: Written by award-winning poet and novelist Elizabeth Acevedo, this tale follows teenager Emoni Santiago’s struggles to support her daughter and grandmother, all while navigating the challenges of high school. A talented cook, Emoni finds a much-needed escape in the kitchen, where she regularly improvises with her dishes to create culinary magic. While the desire and talent are clearly there — can Emoni ever overcome the financial and societal hurdles to fulfilling her dream of working as a chef in a real restaurant kitchen?

Close the Booking Widget
Our site uses cookies in order to function and improve your experience. By continuing, you agree to the use of these cookies. Learn More
Close